Wow, I didn't realize it was sooooo long ago since I posted last. Ok here is an updates as to what has been happening and then I will post half the fair entries here and do a seperate post for the rest since there is so many pictures and explainations to go with them all.

Lucy is getting big now. She is 10 months old and just a bratty and hyper as usual. 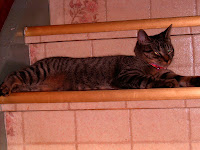 The one who owns the steps.

Well this year I entered the fall fairs again and so did my niece Mackenzie. I don't have any pictures of her and her stuff yet but I will get some and post them too. The first fair Mac entered 4 items and got 3 ribbons. She was so excited. She got a first, a third and I forget. The second fair she entered 5 things and got 2 ribbons. I think she got two thirds and 3 hournable Mentions.

My first Fair I put in 8 enteries and got 6 ribbions. The second fair I put 14 things in and got 12 ribbions. 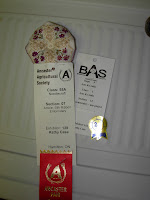 This is the Biscornu this I did for the Victoria Sampler Summer contest. As you can see I took a 1st and a 2nd. This was my first attempt at Ribbon Embroidery (don't like it mind you) and was able to get the top two places with it. 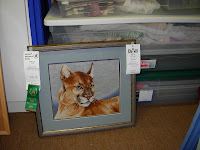 This was my Cougar I made for my nieces mom. I was a little upset it only got a 5th place at the second fair. Isn't it so life like? 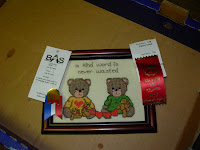 Ok now this one is too funny. I was going to put in the sampler I did for Mac but it was too big so I decided to throw this one in instead. I really did it as a joke to fill a space. Well it has taken 2 1sts. The reason it is so funny is this is the second piece I ever did. I made it like 30 years ago. You can still see the permanent fold in the aida which will not come out. 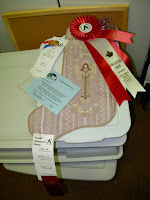 Here is Mac's stocking I made for her. I have taken 2 firsts on it and this is the article that is going to the Convention in February. It also got Best of Show, and I got Most points in Class with that and the other things I entered in the class. Wonder what it will take at the last fair. 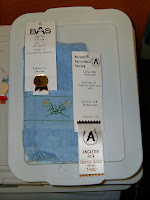 I was almost ashamed to put this towel in. It is one of those really lose woven aida towels, true terry cloth. So the pattern is not even and messy,doesn't show up well. I ended up getting a 2nd and a 3rd. 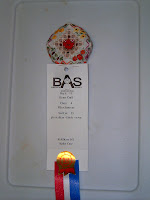 This was the Fall Biscornu that I made for the fall contest with Victoria Sampler. We still have that draw to make later with week so who knows. It could be another luck draw for me with this one.

Well the little shit wan't to go to bed now so I will end here. Tomorrow I will post the rest of the fair pictures.
Posted by Kathy at 9:41 PM

Congrats on all your fair enteries. Love Cougar.